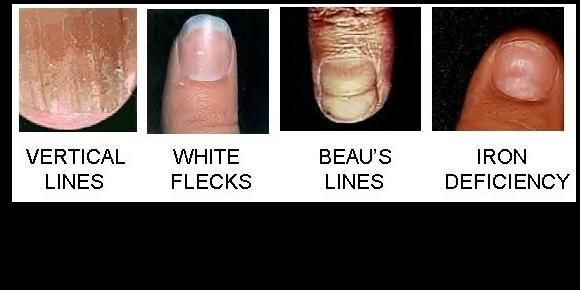 Did you know that the condition of your fingernails can tell you a great deal about your overall health? It's true. Every doctor has had training in something called Physical Diagnosis, looking at and touching the body in order to get a general idea of the condition of the patient. Examples of this are palpating the abdomen, specifically the lower right quadrant. If the patient winces or says that it hurts, further testing is warranted to rule out appendicitis. Abnormal pupillary response after a head injury, look at a possible concussion. Get it?

A few months ago, I noticed that I had deep horizontal grooves going across all of my fingernails. Immediately recognizing them as Beau's Lines, I was concerned but not scared. What in the world could have caused these lines? Then it hit me, 6 months earlier I had COVID! Understanding the mechanism, I decided to see if the indentations grew out with the nails, which they did.  I was relieved that it wasn't something more serious.

So what about YOUR fingernails? Is your body trying to tell you something? They are a great starting point for any sharp-eyed doctor who takes the time to look (assuming your nails aren't painted or covered with acrylics that is). Some of the most common types of nail abnormalities are...

Beau's Lines are deep indentations that run across the nails. This occurs when there is an interruption to growth under the cuticle due to an injury or severe acute illness. This is also attributed to uncontrolled diabetes and peripheral vascular disease, pneumonia, high fever, and zinc deficiency.

Splinter Hemorrhages, not surprisingly, are ruptured blood vessels that look like splinters. They can result from trauma but are also linked to infective endocarditis, lupus, and IV drug use.

Koilonichia (Spoon Nails) is when the center of the nails is deeply depressed giving it a spoon-like appearance and is indicative of Iron Deficiency Anemia, Hemochromatosis (a liver condition where you absorb too much iron), Hypothyroidism, and Heart Disease.

Nail Clubbing is when the nail rises and arches toward the fingertip looking swollen. This is typically the result of low blood oxygen and may be the result of lung disease, cardiovascular disease, IBS, and liver disease.

Pitting looks like a bunch of tiny dents and is often a sign of Reiter's Syndrome, now called Reactive Arthritis.

Terry's Nails are when there is white discoloration beneath the nail in the nailbed, extending from the cuticle almost to the white of the nail's tip, usually in a crescent moon shape. This is indicative of serious conditions such as congestive heart failure, kidney failure, liver disease, and diabetes.

So pay attention to your nails. Remember, you don't always have to be in pain for there to be something wrong. Your body will let you know when it's in trouble, you just have to know how to listen.

Visit us on the WEB